Konorchek Canyon is an amazing tourist destination in the eastern part of the Kyrgyz Range. It looks like a miniature Grand Canyon in the middle of the Tian-Shan Mountains! Thousands of years of soil erosion have made this place incredible.
It is famous for the remains of the ancient volcano Seghizhan-Shokny. The remains of volcanoes for Kyrgyzstan are an exceptional phenomenon due to the fact that Central Asia has almost no traces of volcanoes. Even to this day, it is possible to find the remains of shells from ancient times when there was a sea.
Despite the fact that the canyon is in the middle of the mountains, the temperature here is on average warmer than in the Chui Valley. There is practically no snow in the winter and the temperature hardly drops below 40 degrees Celsius in summer. Therefore, it is better for tourists to visit during spring or autumn.
The way to the canyon passes along the canal of a long dried up river. At times, the rocks are so close that there is a passage about a meter and a half wide. A very unusual phenomenon for the Tien Shan.
Konorchek is an excellent choice for a one-day excursion. The hiking path to the canyon is 5 kilometers, but for fans of long hikes, there are many places to go because the canyon area is 200 km. 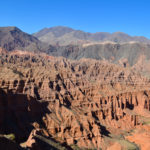 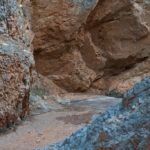 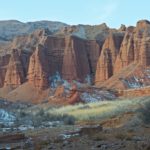 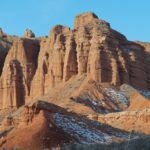 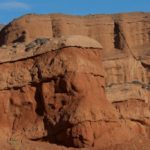 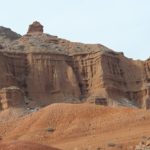 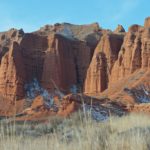 How to get to the Konorchek Canyons?

Konorchek Canyons are located 120 kilometers east of Bishkek. The entrance to the canyons is located in Boom Gorge, near the “Krasnaya Rechka” bridge. It is possible to get to the canyon by public transport: take a bus to Balykchy from the West Bus Station in Bishkek and get off at the “Krasnaya Rechka” bridge. Since there are many regular marshrutkas to Bishkek from Balykchy it is easy to travel to and from the site. Entrance to the territory of the canyon is free.

Konorchek Canyons on the map

No guest houses and groceries