Folk traditions and customs of Kyrgyz people are closely connected with the nomadic way of life peculiar to the Turkic and Mongolian peoples. Literally, everything is connected with nomadism: holidays, folk crafts, music, cuisine and everyday life. And to this day, despite the fact that Kyrgyzstan is a modern state, people’s traditions are carefully passed down from generation to generation. 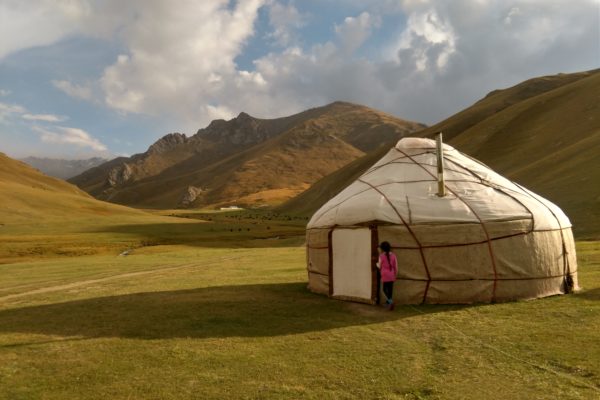 Of course,one of the most important symbols of Kyrgyzstan is a nomadic dwelling – a yurt. For centuries,  the yurt that was the main dwelling of the Kyrgyz, determining their way of life, consisting in moving from the plains to the mountains and back. In the yurts, people lived all year round and the yurt itself has great value and significance. Technically, the yurt represents a small tent, which has a wooden prefabricated frame and covered with layers of felt. All the elements of the yurt are demountable and therefore it can be assembled and transferred to another place without any difficulties.
Yurt is not a purely Kyrgyz invention, it is widely distributed among the Mongol and Turkic peoples. However, the Kyrgyz yurt is known as the most beautiful and skilfully made of all the others and is characterized by a more sophisticated manufacturing technique that requires a lot of patience and skill. So, the poles for the roof in the Kyrgyz yurt are bent by prolonged soaking and drying, and the poles for the walls are connected by cow veins, which provides very good mobility and at the same time strength and lightness. The most difficult part of the Kyrgyz yurt is the tunduk – the upper part of the yurt, which is the junction point for the roof, which allows the yurt roof to be stable and not crash. Also the tunduk serves as a chimney and a light source in the daytime. By the way, the tunduk that is depicted on the flag of the Kyrgyz Republic.
Also, unlike other countries, where yurts are currently installed and manufactured mainly for decorative purposes and are relatively rare, in Kyrgyzstan the yurt is still widely used in people’s lives. Nowadays, authentic Kyrgyz yurts can be easily found on high mountain pastures, where cattle are grazing in summer. Yurtas are also widely used for guest houses in hard-to-reach mountainous areas.

Nomadic and cattle-breeding culture of the Kyrgyz people is associated with animals of material culture. Out of sheep’s wool and animal skin, Kyrgyz for a long time made many beautiful and interesting things.
The main product of Kyrgyz handicrafts is, of course, felt. Felt is a coarse matter that is made of pressed sheep’s wool and it is felt that has become one of the most significant materials in the Kyrgyz culture.  From the felt is made a cover for yurts, clothing, including a national robe chapan and ak-kalpak, toys, interior items and much, much more. However, the most interesting is Kyrgyz felt carpet – shyrdak, the manufacture of which requires great skill and perseverance. A distinctive feature of shyrdak are patterns in the form of ethnic ornament, whimsical and rather complicated in application.
Also widely known are Kyrgyz mats woven from a plant called chi, which serve for the production of felt, insulation of yurts and are used for decorative purposes.
Another side of folk handicraft is the art of leather dressing and the production of various products from this material. Sheaths for weapons, kamchi and lashes, harness and saddles for horses, kitchen utensils are just a small part of those amazing things that folk craftsmen do to make leather. 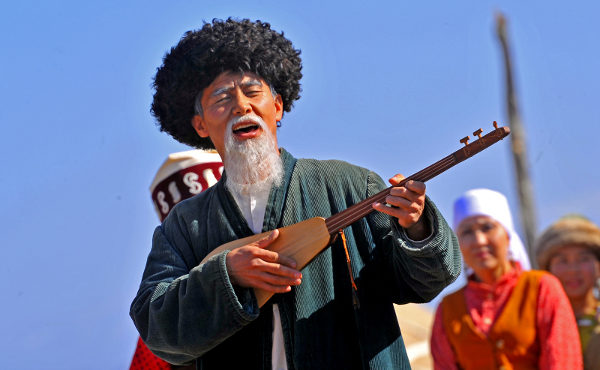 Oral and musical creativity is a very important part of the national Kyrgyz culture. Its most striking expression is the largest epic in the world – Manas. This epic written in the interval between the 16th and 17th centuries was transmitted orally until the 20th century, when it was recorded by Soviet researchers. Manas is a huge work that has more than 500,000 lines of text. The epic narrates about the events of the 16th century, the migration of Kyrgyz from Altai to the Tien Shan, the fight against the Chinese invaders and it has real historical roots. It is important to know that the epic is performed in a very special way. The storytellers of the epic are called manaschi and are able to reproduce the epic text for several days in a row without interruption, falling into a kind of trance. Very often such a narrative is combined with the accompaniment of the Kyrgyz national instrument – komuz.
Another expression of the musical culture of the Kyrgyz people is the famous poets-storytellers – akyns. Their distinctive feature is improvisation and each performance of the song is certainly different from the other.
Of course, the Kyrgyz also have their own musical instruments, which are remarkable for their sound, unlike anything else, the most famous of which are the komuz, temir-komuz, kek-kiyal, kernei, surnai, choor and zhetigen. 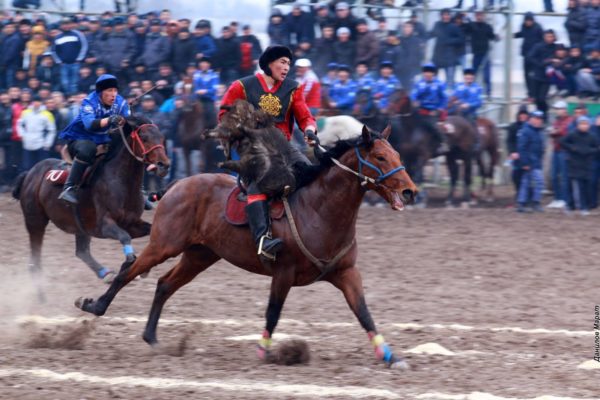 The history of Kyrgyz national sports games goes back to distant nomadic antiquity, when men needed to be able to show their strength, dexterity and willpower. Not surprisingly, almost all national sports in Kyrgyzstan are connected with horses.
The most famous is the competitive team game kok-boru, where two teams of 8 people compete in throwing the carcass of a goat into the opponent’s goal. This game requires great endurance, physical strength and skills. Great demands are also placed on the horse itself, which must be obedient, strong and to some extent fearless. Also popular is er-enish – the struggle of horse riders, the meaning of which is to throw the opponent off the horse. Equestrian races and speed competitions are also widely spread among equestrian sports.
Another important sport for Kyrgyz is wrestling, and as widespread throughout the world, Greco-Roman and freestyle, as well as the national Kyrgyz wrestling on the belts – alysh.
In addition to the competition in strength and agility, there are national intellectual games. These are the games of mangala and toguz korgol. And one of the most popular entertainment games is the Chuko, known also as ankle bone shooting game.