Kyrgyzstan is a country where a nomadic and sedentary culture united at the crossroads of the Great Silk Road. That is why the Kyrgyz national cuisine is an amazing combination of dishes of different Central Asian nationalities: Kyrgyz, Uzbeks, Uighurs and Dungans. A distinctive feature of Kyrgyz dishes is that all of them are prepared exclusively from fresh products and are rarely stored for future use, and the recipes for their preparation, although they seem quite simple, in fact, contain a lot of subtleties, quite difficult to cook. 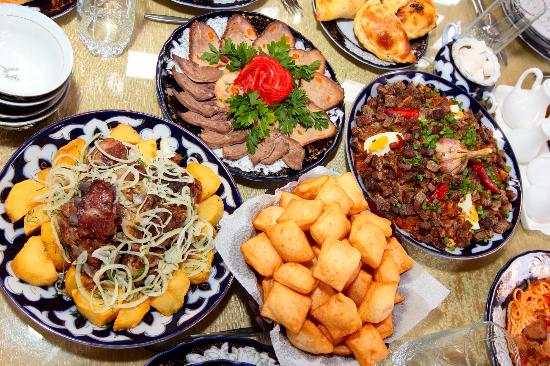 Also it should be noted that practically all the dishes of Kyrgyz cuisine the main ingredient is meat: lamb, beef, horse meat and yak meat. This is connected with the cattle-breeding traditions of nomadic Kyrgyz who go deep into antiquity. Dairy products are also widely used. In the southern, agricultural regions of the country, in addition to meat, a large number of fresh vegetables and seasonings are added to the dishes. 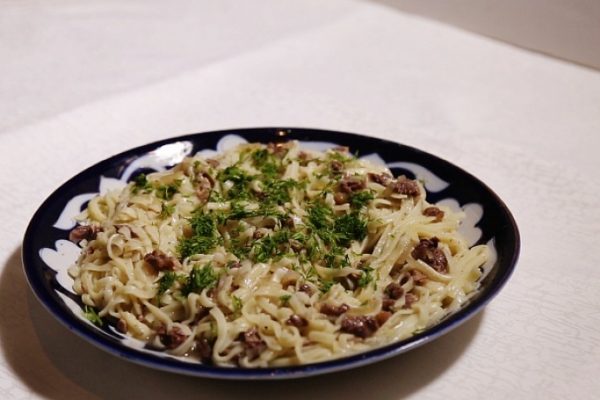 Beshbarmak is one of the most favorite and traditional Kyrgyz dishes, having Turkic roots. Beshbarmak is a chopped meat with noodles, onions and meat broth. It is noteworthy that traditionally beshbarmak is eaten by hands. This is the reason for the name of the dish: in translation from Kyrgyz, “beshbarmak” means “five fingers”. Beshbarmak is widespread mainly in the north of Kyrgyzstan, in Chui, Talas and Naryn oblasts. Beshbarmak without noodles is called “Naryn”.

Plov is a traditional Central Asian dish that comes from the Ferghana Valley and is widespread in southern Kyrgyzstan. The basis of the dish is rice, carrots and meat, first fried and then cooked. There is no canonical recipe for cooking plov and practically every region has its own recipe. The quantity of meat, rice and carrot can vary, additional ingredients such as garlic, raisins, dried apricots, nuts, etc., can be added. However, the most delicious is the plov from Uzgen rice, which is prepared in Uzgen and Osh. 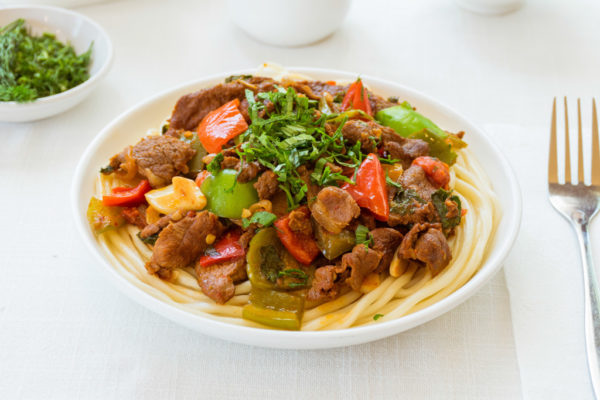 Lagman is a boiled noodle, seasoned with fried, then extinguished vegetables and meat. Lagman has Dungan roots and since ancient times is one of the favorite dishes of national cuisine. Like plov, the lagman has many varieties: fried boso-lagman, served separately gyuro-lagman, etc. Also, the ingredients may vary quite a bit, depending on the season or place of preparation.  In Kyrgyzstan, the lagman is spread everywhere. 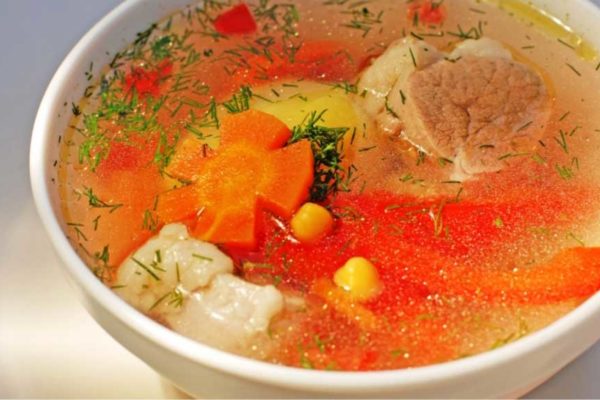 Shorpo is a strong and fat meat broth, which can contain carrots, potatoes, noodles and greens. Shorpo is cooked everywhere in Kyrgyzstan, however, the recipe for its preparation can be very different depending on the place. For example, in the northern regions of Kyrgyzstan almost no seasonings are added to shorpo and the whole emphasis is on the prolonged cooking of meat broth. In the southern part of the country, on the contrary, a large number of aromatic spices and ingredients are added to shorpo. 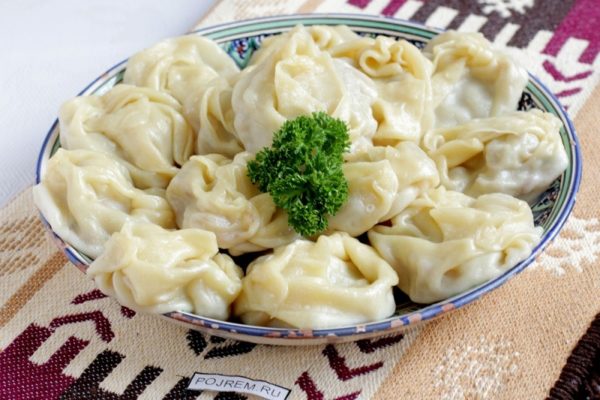 Manty is a dough filled with meat, prepared on steam. This is a traditional Central Asian dish with Chinese roots. In Kyrgyzstan, the most common is filling finely chopped lamb or beef with onions. Often, to the meat is added  pumpkin or jusai. Vinegar is used as a seasoning for manty. The dish is widely distributed throughout Kyrgyzstan. 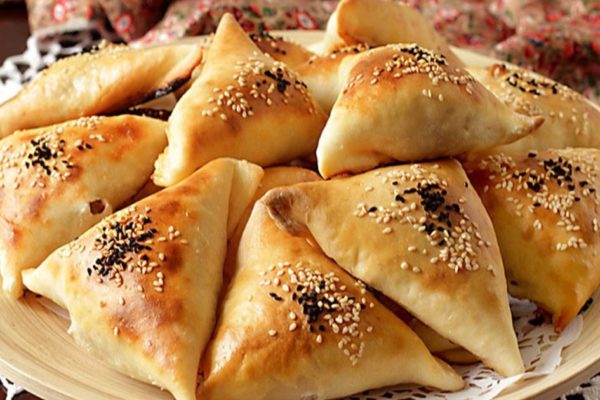 Samsa is a baked dough, often puffed, with a variety of fillings, primarily meat. Samsa is one of the most favorite Kyrgyz dishes. In cities and large villages, Samsa is a popular option for street food. Traditionally, samsa is baked in a tandoor – a clay oven, however in the cities samsa is baked in ordinary ovens and has a triangular shape. Often in addition to meat as fillings are added pumpkin and potatoes. The most tasty in Kyrgyzstan is Osh tandoor samsa. 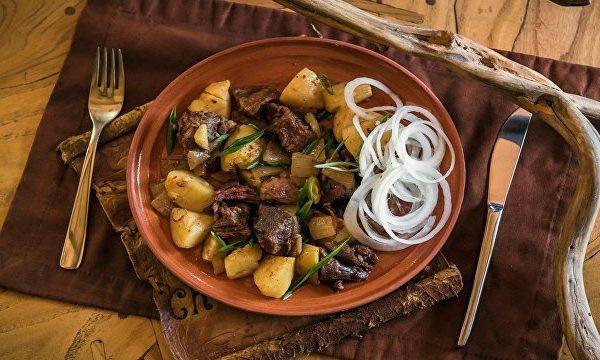 Kuurdak is a fried meat with potatoes, onions and a lot of spices. It is cooked almost everywhere in Kyrgyzstan. 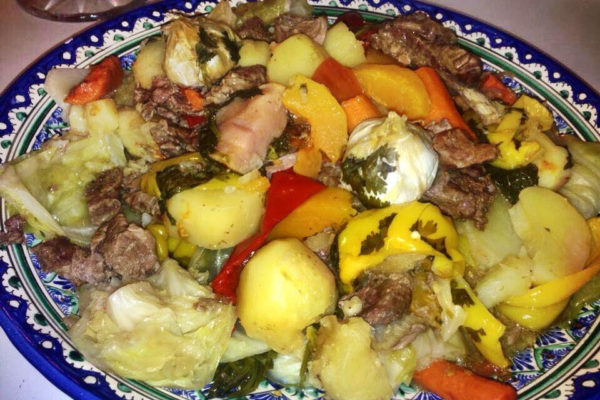 Dymdama is stewed vegetables and meat in a cauldron, vegetables are cabbage, potatoes, carrots, eggplants, peppers, onions, celery and many others. 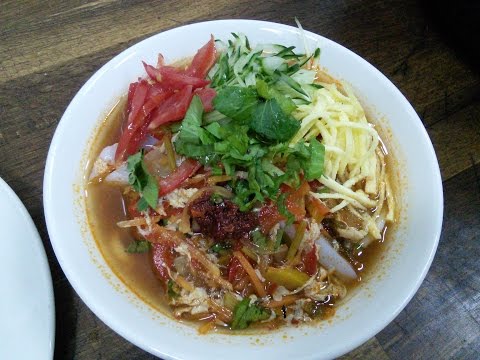 Ashlyan-fu is a cold soup of Dungan origin, prepared from sour-spicy vegetable broth, noodles and starch. The dish is common in the Chui and Issyk-Kul regions of the country, but the most delicious is Ashlyan-fu, which is prepared in the city of Karakol, where Ashlyan-fu is served with a small fried patty with potatoes. 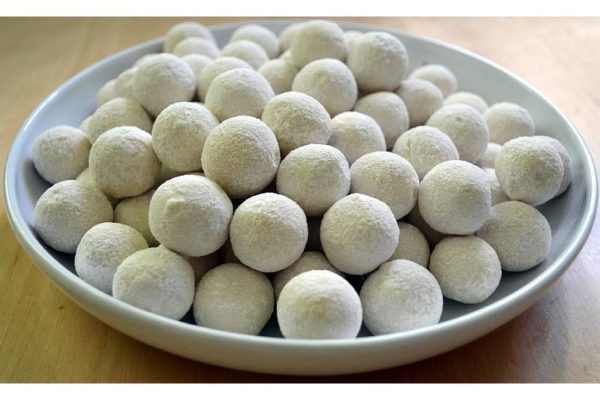 This is a sour-milk product, in the form of small dried beads, a kind of Central-Asian cheese. The history of kurut goes deep into the nomadic antiquity of the Turkic peoples. Manufacturing kuruts was one of the few ways to stock up provisions for a long time. Kurutas are noteworthy for the fact that they can be stored literally for years. The taste is salty and sourish. It is widely distributed throughout the territory of Kyrgyzstan. 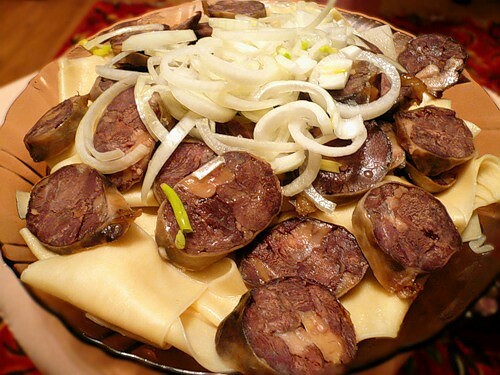 Chuchuk (or kazy, kazy karta, etc.) is a Central Asian sausage made from horse meat. For its production, horse instine is stuffed with horse meat with salt and spices. Use chuchuk in dried, boiled or smoked. 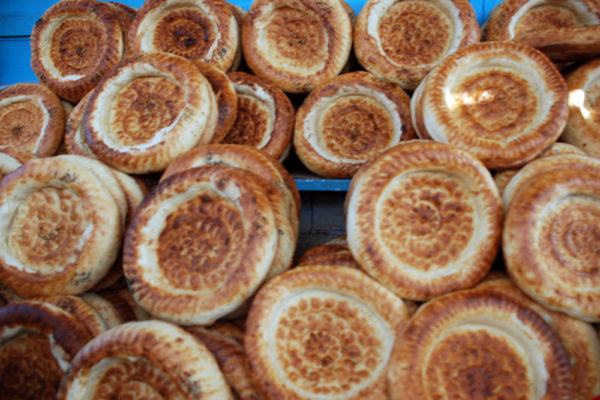 Naan is a national Kyrgyz bread baked in tandoor, having a flat and round shape. Naan has many varieties. Naan with various additives has individual names: patyr-nan, tokoch, May-tokoch, etc. 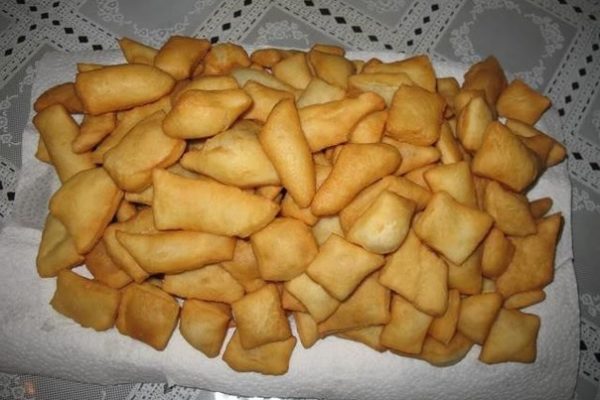 Boorsok is the most favorite kind of bread for holidays. It is a small piece of yeast dough fried in oil. Bohorsoks are tasty, it can be both salty and sweet. 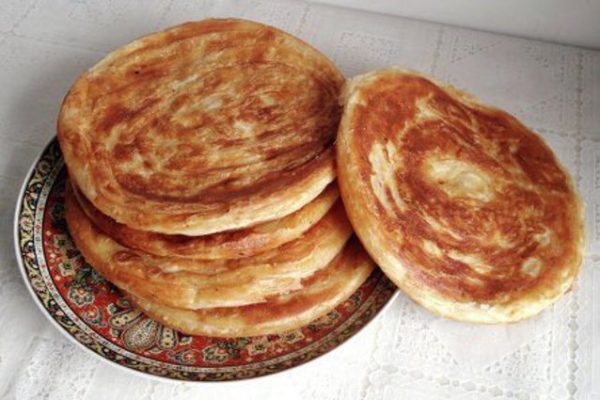 This is bread made from yeast dough, baked in a frying pan with a large amount of butter or kaimak – fatty sour cream. Often kattama is filled with onions.

Maksim is a Kyrgyz national drink made from cereals: barley, millet, wheat and corn. It has a sour taste.

Ayran is a sour-milk product distributed in Central Asia. It is a thick mixture, tasteful like yogurt.

Chalap is diluted with water ayran, to give a more liquid consistency. Also widely known as tan.

Kymyz is a traditional Kyrgyz drink produced by their mare’s milk, by careful whipping. Kymyz is prepared only for the period from May to September, when the mare’s feed their offspring and they can be milked. Kymyz has a tonic effect and at the same time is slightly alcoholic.

Bozo is a low-alcoholic Kyrgyz national drink made from millet with the addition of yeast.