The Abshir-Ata Gorge is primarily known for its 15-meter waterfall, which is remarkable for its flowing stream from a small karst cave located right in the rock. The waterfall and the gorge are one of the most visited sights of the Osh Region. This place is located 70 kilometers from the city of Osh.
For centuries, this waterfall was considered a sacred place, because of its unusual nature – on the territory of Kyrgyzstan there are practically no waterfalls flowing directly from the rocks. Part of this is justified by the fact that the water of the Abshir-Ata Waterfall is mineral and can really help to improve health.
The waterfall is located in the beautiful valley of the river Abshir-Say at an altitude of 1500 to 2500 meters. In addition to the waterfall, there are still a lot of interesting sights in the gorge – for example, several caves: Khurkhyz and Chillyakana. In one of them is the source of Kotur-Bulak, which is also considered sacred. Tourists throw coins into the source as it is believed that this brings happiness. In the valley of Abshir-Sai it is possible to see paintings in caves. The caves are located between 5 and 20 kilometers from the waterfall. Ten kilometers from the waterfall is a small lake of gravel origin, near it is possible to find abandoned adits, where various minerals were mined.
Since the place is very popular among tourists and locals, it is possible to buy souvenirs here, as well as dine at a cafe located very close by. 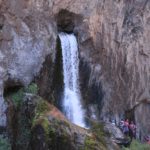 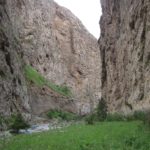 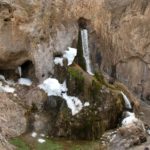 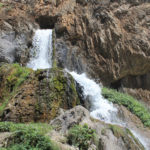 How to get to the Abshir-Ata Falls

The waterfall and the gorge are located 70 kilometers east of the city of Osh.