Sulmaman-Too (Mount Solomon) is the most important cultural landmark in Kyrgyzstan and the first object of the country, included on UNESCO’s cultural heritage list, located in the heart of Osh.

The mountain is almost a kilometer in length and has five peaks, the highest one rises to a height of 150 meters above the city. Due to geological features, there are many caves and grottoes in the mountain, which is quite unusual for Kyrgyzstan.
In the early appearance of civilizations in Central Asia, this comparatively small mountain had a cult significance for people. The first traces of worship near the mountain go to the deepest antiquity and date back to the X-XII centuries BC, ie more than 3000 years ago. To this day, many petroglyphic drawings on the mountain remind of this. Therefore it is not surprising that the oldest city in Central Asia – Osh, was founded around the mountain. 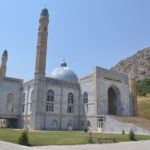 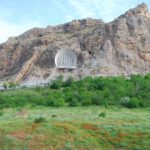 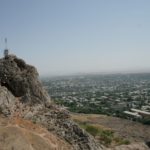 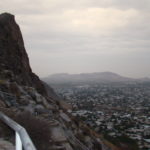 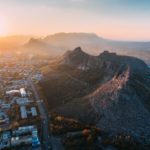 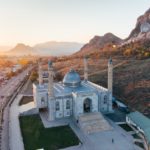 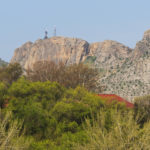 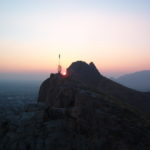 In the Middle Ages, the mountain became an important object of religious worship associated with the Islamic religion. The mountain is named after the legendary King Solomon, revered in Islam and in Christianity. According to legend, on the top of this mountain the prophet prayed and left traces of the knees and forehead of the praying.
The historical significance of the mountain is closely connected with the name of Babur – the famous military commander and the founder of the Mughal Empire. The empire stretching from the southern borders of the Ferghana Valley to the southern part of India. Babur wrote about the mountain in his famous work Baburnama. He was born close to Osh and loved to walk along Sulayman-Too and pray in solitude on its slopes. To do this, Babur ordered to build on the mountain a small prayer house, which is known as “the house of Babur”, officially called the Takhta-Sulayman mosque. Only the replica of the original structure reached us, since in the Soviet years, as part of the campaign against religion, the construction of the 16th century was demolished and restored in 1991.
A large number of legends are associated with Mount Sulayman-Too. Widely known smooth stone, where women roll down, wishing to have a child. The slopes of the mountains are covered with Arabic letters, the meaning of which to this day is for certain unknown, and even geologically the formations on its slopes in the form of spots have the appearance of various animals.
In the Soviet period on the slopes of the mountain was built a museum right in the cave of the mountain. The exposition of the museum tells about the history of Osh and the region. The architecture of the museum is an outstanding example of Soviet modernism.
At the foot of the mountain is also a large number of historical attractions, associated, mainly with the Islamic religion. The main of them are the mosques Ravat-Abdullahan, built in the 16th century and the mausoleum of Asaf-ibn-Bukhriya, dating from the 11th century. All this makes Sulayman-Too the most important Islamic shrine in Central Asia, which is visited annually by thousands of pilgrims and tourists from all over the world.
There are also more modern sights, for example, the highest three-story yurt in the world, where a small museum dedicated to the nomadic history of the Kyrgyz people.

Sulayman Mountain on the map