Ala-Too Square is the central square of Bishkek and the main square of the country where the White House, the State History Museum, the flagpole with the national flag, the monument to the victims of the revolution on April 7, the statue of Chingiz Aitmatov and the statue of Manas, the hero of the Kyrgyz folk epic, are located.
The name of the square comes from the mountains of the Central and Western Tien-Shan, which the Kyrgyz nomadic tribes called Ala-Too(from Kyrgyz “Motley mountains”). The whole area including the building of the Historical Museum standing on it, conceived as a museum of Lenin, creates a single architectural ensemble. A distinctive feature of the square is the marble and granite facing of buildings. The square was built relatively recently – in 1984 and crosses several streets: Chui Avenue and Kievskaya Street. 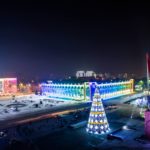 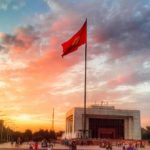 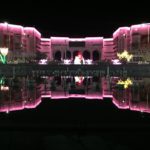 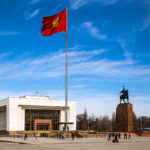 In the very center of the square, there is the statue of Manas, which was installed in 2012. Earlier on this place was the Kyrgyz statue of Liberty, established in 2003. Initially, there was a statue of Lenin, which is now located behind the State History Museum on the Old Square of the city.
Near to the statue of Manas is a flagpole with the national flag of the Kyrgyz Republic, 45 meters high. Near the flag standing the guard of honor.
The main building of the square is the State History Museum in the form of a cube. On a vast site in front of the museum are fountains and flower beds.
Opposite to the museum, there are many fountains, including a light and musical fountain in the center, as well as benches and flower beds.
In the southern part of the square, there is a statue of the great Kyrgyz writer Chingiz Aitmatov.

Ala-Too Square on the map