Oak Park (also a park named after Chyngiz Aitmatov) is the oldest park in Bishkek, located right in its heart. This is one of the most beautiful and quiet places in the capital.
The history of the park began in the pre-revolutionary period, in 1890, when gardeners under the direction of the botanist A. Fetisov began planting trees around the building of the former St. Nicholas Church, which now houses an art gallery. By the way, the gallery was built in 1885 and now it is considered as one of the oldest buildings in Bishkek. In 1914, the first cinema in Kyrgyzstan was opened in the park. 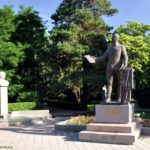 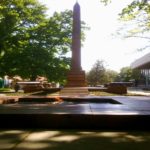 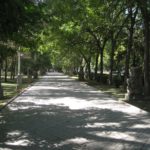 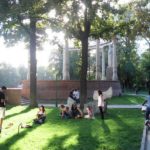 In 1919, after the establishment of the Soviet Power, there were buried Red Army soldiers, who protected the young Soviet State from the rebels – the White Guard. In 1970, on this place was built a monument with cast-iron cannons and the Eternal Fire in memory of the fallen in World War II.
Tthe Russian Drama Theatre named after Chingiz Aitmatov is also located near the park. The building is a vivid example of constructivist architecture.
Other attractions of the park include the 12-bowl fountain, the impressive open-air sculpture museum and the statue of Kurmanjan Datka – the Kyrgyz Queen.

Oak Park on the map