The Issyk-Ata Gorge is known from ancient written sources. The famous Issyk-Ata hot hydrogen sulfide springs, the ancient Buddha image and many other sights are located here. In the 12th-14th centuries, the gorge was the cradle of Buddhism in the region, whereby now Issyk-Ata is not just a unique monument of nature, but also a place with an amazing history.

The Issyk-Ata resort is the oldest in the Chui Valley and has been operating since 1895. This place has been known for its geothermal activity since ancient times. During the Soviet period, it became one of the most famous resorts in Kyrgyzstan. Hydrogen sulfide water is an excellent cure for treating a wide range of diseases of the musculoskeletal system, the gastrointestinal tract and many others. On the territory of the resort there are swimming pools with hot mineral water, open all year round. Entrance fee: from 100 soms per person.

There are many natural sights in the gorge: 1.5 kilometers from the resort there is a ten-meter waterfall known as Mramorny, one of the most visited places in Issyk-Ata; there are also two other waterfalls Bala-Partak and Jary-Tash. Mount Botvey (Bytyi), at the foot of where the gorge is divided into two parts – the Bytyi and Ayak-Kel. There are many lakes in Issyk-Ata. On the right side of the gorge, called Ayak-Kel, three small lakes are successively located, the largest one is Orto-Kel. 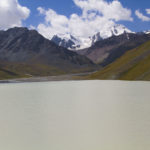 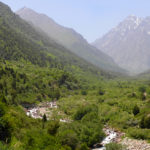 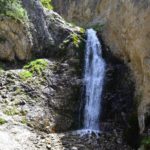 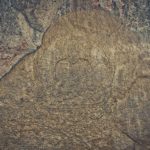 How to get to Issyk-Ata?

The Issyk-Ata Gorge is located 40 kilometers east of Bishkek. The resort can be reached by public transport: bus number 316 travels daily from the East Bus Station of Bishkek; fare is 50 soms. There are two roads to the gorge: lower and upper. The lower road passes through the Chui valley and through the village of Ivanovka. The upper road passes through the mountain valley, along the villages of Gornaya Maevka and Toguz Bulak. The upper road is less crowded with transport and very comfortable for cycling.

Issyk-Ata gorge on the map

Mobile Network is available up to the territory of the resort.

There are several guesthouses and holiday hotels, especially in the territory of the resort. Also, there are grocery stores, café and cafeteria

There are many springs in the lower part of the gorge and in the resort. It is not recommended to drink water from the river, especially below the resort.

There are practically no places for camping below the resort. But if you plan to travel deep into the gorge, finding a place for a tent is not difficult.