Son-Kul Lake (also Song-Kul, Son-Köl, Sonkul, etc.) is the second largest lake in Kyrgyzstan, located in Naryn Region about 280 kilometers from Bishkek.
Son-Kul is located at an altitude of 3000 meters in a large inter-mountain valley, surrounded from the north by the Sonkul-Too Ridge and the Moldo-Too Ridge from the south. The lake is cold and quite deep – the maximum depth of the lake is 14 meters. Son-Kul freezes approximately in mid-November and melts only by mid-April.
The area around the lake is very picturesque, especially in summer. Hills and snowy peaks of the Central Tien-Shan ridges surround Son-Kul. Due to the high altitude, there are no trees, only low hard grass and edelweiss can grow in these conditions.
Although the lake is not very large in size, its banks are quite different from each other. The southern and eastern coasts are quite flat and in some places are swamped, while the north and west coasts are quite steep. The road that runs along the lake winds about the hills. It is especially pleasant to ride it by bike. The best view of the lake opens from the west coast.
Son-Kul is a rather inaccessible place, and therefore anthropogenic influence is minimized here. Only in the summer period nomad camps from villages located in the neighboring Jumgal Valley and from Naryn come here. The rest of the time the Son Kul Valley is completely uninhabited.
On the northern shore of the lake is located the only stone building in the entire valley – the mausoleum of Tailak Baatyr, built in the late 19th century.
Son-Kul Lake is a very popular place for tourists and many tourist routes pass here. Thanks to the convenient geographical location of the lake, a journey from one part of the country to another can be combined with a visit to Son-Kul. Son-Kul is very interesting because in the summer it is possible to see the real nomadic way of life and spend a couple of days away from civilization. 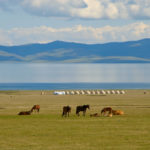 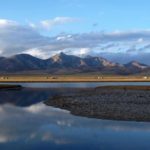 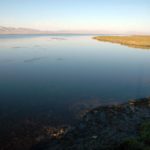 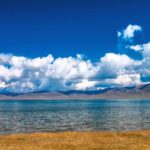 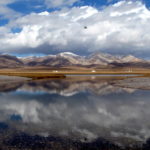 How to get to Son-Kul?

There are four automobile passes to the lake. The most popular and easily accessible is Kalmak-Ashuu (northeastern part of the lake), which is located on the Bishkek-Torugart Road, 3 km from the village of Sary-Bulak. You can also get to the lake by car through the passes of Terskei-Torpok (also called the 33 Parrots, located in the southeastern part of the lake), Moldo-Ashuu (the southern shore of the lake) and Kara-Keche (southwest coast). In addition to car passes, many pedestrian passes lead to the lake, on which you can also travel by bicycle or horses. These include the Tuz-Ashuu, Chil-Bel and Uzbek Passes.

The mobile network is partly available in some areas

There are several yurt camps, where possible to eat and sleep