Tash-Rabat (also Tashrabat) is an ancient caravanserai located in the territory of Naryn region, not far from the border with China. It was one of the key parts of the ancient Great Silk Road.
The caravanserai is located at an impressive altitude of 3100 meters in the southern part of the At-Bashi ridge. Numerous caravans laden with oriental goods from China had been founding shelter for centuries here. The history of Tash-Rabat goes back to ancient times. Back in the 2th-1th centuries. BC. e. and in the 1th-2th centuries. AD Caravans of merchants used to go around this area. Later the main route of the Silk Road had changed but still, the place was used by trade caravans. In the 10th-11th centuries, a monastery was founded here. According to different versions, either Buddhist or Christian, which fell into decay. On its remains in the 14th-15th centuries, a caravanserai was built, one of the four most important in Central Asia.
This is a splendidly preserved cultural and historical monument, unique in its kind in Kyrgyzstan and one of the most important remnants of the Great Silk Road. 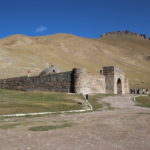 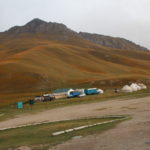 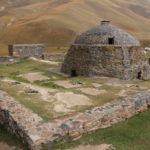 How to get to Tash-Rabat?

The turn to Tash-Rabat is about 100 kilometers on the Naryn-Torugart road. On the road there is a road sign Tash-Rabat and Foursquare table.

There are several yurt camps, where possible to eat and sleep

Drinking water from the river without boiling is not recommended