Issyk-Kul Lake (also Yssyk-Köl) is undoubtedly the main tourist attraction of Kyrgyzstan. Issyk-Kul is a unique place in every aspect. The lake is located in the center of the extensive Issyk-Kul basin, which lies between the two huge ridges of Kyungey Ala-Too and Terskey Ala-Too, covering almost the entire area. The lake is 1,700 meters above sea level. This makes Issyk-Kul the second largest highland lake in the world, after the Lake Titicaca in South America. The deepest part of the lake is 702 meters making it one of the deepest lakes in the world. The length of the lake’s coastline is almost 700 kilometers, which clearly demonstrates its scale. More than 80 rivers from the slopes of the Tien Shan flow into the lake.
The water in Issyk-Kul is salty and it does not freeze even in winter. This is how the lake got its name. Issyk-Kul in Kyrgyz means “hot lake”. The lake creates a peculiar marine climate in the valley, which is extremely unusual for highlands and Central Asia in general. For example, the winters here are much milder than in other regions of the country, and in summer, on the contrary, it is not very hot. In summer, the water in Issyk-Kul warms up to 20-25 degrees Celsius and therefore the lake is a favorite swimming place of both Kyrgyz nationals and tourists from other countries. 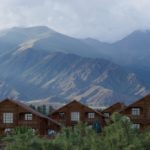 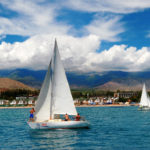 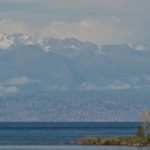 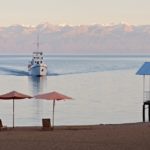 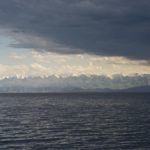 Geographically, the shores of the lake are very different. In the western part, there is a predominately dry and sandy topography. There is also quite a bit of vegetation and the water level is rather low. In the middle, the lake is expanding sharply, and here are the deepest places of Issyk-Kul. At this point the opposite shore is practically invisible, and the lake is more like a sea. In the eastern part, the lake’s water is slightly less salty due to the large number of rivers flowing into the lake. The shores of the lake here are marshy and grassy, with many small islands, bays, etc.
Issyk-Kul’s shores are also culturally different. Traditionally, the northern shore of the lake is more visited and developed for tourism due to the flat coastline and sandy beaches. On the northern shore of Issyk-Kul there are many hotels, hostels and guesthouses that host visitors all year round. Especially popular are the city of Cholpon-Ata and the village of Bosteri. However, it should be noted that the northern shore is more suitable for recreation. There are not many geographical attractions, but there are good conditions for relaxation on the shores of the lake.
The southern shore of Issyk-Kul is more deserted and calm. There are fewer beaches, but very many different sights untouched by man. This is due to the fact that on the south coast the shore is located close to the giant Terskey Ala-Too Range. Because of this, the coastline is heavily indented, and the bottom of the lake is rocky. In the western part of the southern coast, clay canyons, dried mountains and hills prevail. The landscape changes only closer to the middle, when the mountains approach the maximum (what does this mean) to the shore. The southern shore is suitable for those who seek solitude, nature and rest away from civilization and noise.
Issyk-Kul has an ancient and rich history, the first written references to the lake date back to the 2nd century B.C. On its shores lived primitive people who left behind numerous petroglyphs that can be seen to this day. The ancient Scythian tribes also lived here in their main city Chigu. Now this city is under Issyk-Kul’s water. Nestorians, who brought the relics of St. Matthew to the shores of the lake, were here (the relics exact location is still one of the main mysteries of Issyk-Kul). For modern sights it is worth mentioning the city of Karakol, remarkable for its architecture, as well as the cultural center of Ruh Ordo in the city of Cholpon-Ata. Also, every two years on the shores of the lake there are the “World Nomadic Games” – the world’s largest competition for nomadic sports.

How to get to Lake Issyk-Kul?

Every year hundreds of thousands of people visit Issyk-Kul, and therefore it is easy to get to the lake by road from almost any region of the country, especially in summer. It is possible to get to the lake from Bishkek’s Western Bus Station. Depending on your destination, a marshrutka can depart every 15-30 minutes. The price of the trip depends on the distance: a trip to Balykchy will cost you 150 soms, and a trip to Karakol is 400 soms. It is also possible to get to Issyk Kul by train in summer. The train departs from the city railway station at 6:30 am and arrives in Balykchy by 11:30 am.